Fibroma of Flexor Tendon Sheath of Finger: A Rare Tumor of Hand-Revisited

Fibroma of tendon sheath (FTS) a rare, solid, benign tumor is commonly found in upper extremity particularly the hands. FTS of the finger is further rare and unusual variety which poses significant preoperative diagnostic challenge. We herein report a case of FTS of middle phalynx of the middle finger of the right hand in a young male who was no predisposing factor of its occurrence. We also reviewed the available English literature and recommend that FTS should be included in the differential diagnosis of the soft tissue tumors of the fingers and hand.

Fibroma of the tendon sheath (FTS) is a rare benign tumor that arises from the flexor tendon sheath of the hand. It usually presents as slow growing, painless and small nodular swelling over the volar aspect of the fingers, palm or wrist. It is typically localized on the flexor tendons of the hand. It was first described by Geschickter and Copeland in 1949 [1] which was later described as a separate clinicopathological entity by Chung and Enzinger [2]. In their series, 98% of the lesions were in the extremities, 82% in the upper extremities. The predominant lesion locations in the upper extremities were the fingers, usually the thumb, index, or middle finger (49%); the hand, (21%); and the wrist (12%). Lesions were typically located on the flexor surfaces, occurring most often in men (75%) 20–50 years old. The etiology is unknown, but preceding trauma has been noted in 20% of cases, suggesting a possible risk factor [3-5]. The predilection for specific digits of right hand and the finding of fasciitis like areas in some cases suggest a possible reactive origin [6]. Microtrauma of the hand by routine manual labor has also been suggested as predisposing factor [7]. Surgical excision is the mainstay of the treatment but it should be done with great care, as recurrence is more common in hands and fingers with as high rate as 24% [8].

A 32-year-old non-smoker, non-alcoholic, non-vegetarian male presented with slowly growing painless swelling on the volar aspect of the middle phalynx of middle finger of the right hand (Figures 1 and 2). There was no history of penetrating or blunt trauma, occupational stress over the area or previous operation. Patient had no complaint except some restriction in the flexion of the distal interphalangeal joint. On examination, swelling was nontender, firm to hard in consistency with restricted mobility over the deeper structures. Skin over the swelling appeared normal. Other systemic examinations were normal. No regional lymphadenopathy was noted. Radiographs of the hand revealed no significant finding. The blood biochemistry and serology were all within normal limits. Magnetic resonance imaging (MRI) could not be done due to financial constraints. Fine needle aspiration cytology (FNAC) of the swelling was inconclusive. 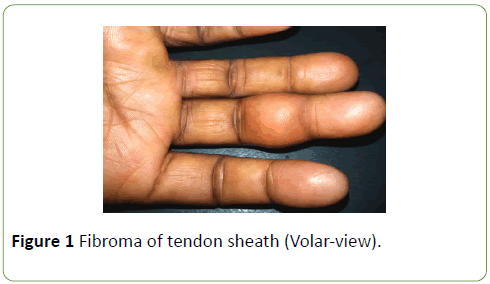 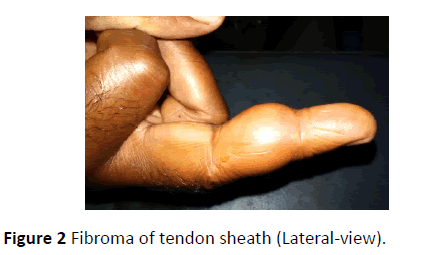 The diagnosis of benign tumor of the hand was made provisionally and patient was planned for the excision of the tumor under local anesthesia. Under all aseptic precautions, 3 ml of 0.5% of lidocaine was injected around the tumor. Small vertical incision was given over the swelling and the tumor was excised with its capsule from the surrounding structures. Tumor was adhered to the tendon sheath of the flexor tendons of the digits from the base which was then meticulously separated by blunt and sharp dissection. Neurovascular bundles were well preserved. Skin was closed with 4/0 prolene suture. Patient’s recovery was uneventful. Stitches were removed after day 7 with no complication. Finger movements were perfect and flexion at the distal interphalangeal joint was full after three weeks. 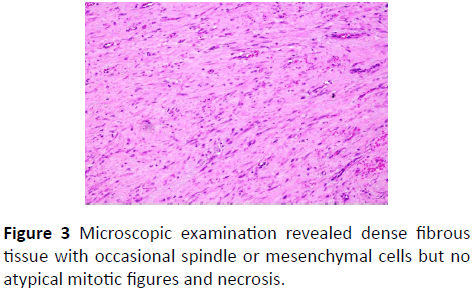 Fibroma of the tendon sheath of the fingers is a rare benign tumor of the hand. It is well circumscribed, lobulated fibrous tumor attached to tendon or tendon sheath mostly presented in men, aged 30-50 years old with nodule on the volar aspect of fingers, hands or wrist. Clinically the tumors presents as solitary, slow-growing subcutaneous nodules. About one third of the patients present with localized tenderness and pain due to compression of the underlying nerves [2].

Fibroma of tendon sheath has also been reported to cause a “trigger wrist” [9-11], an impingement of the tumor adhering to the flexor tendons in the carpal canal, resulting in snapping finger or carpal tunnel syndrome. It has several etiologies including tumors, tenosynovitis, and anomalous muscle bellies [10,11]. The tumors known to cause “trigger wrist” are FTS and tenosynovial giant cell tumor, both tend to adhere to the tendon [11]. However, there have been few reports of the tumor causing complete and flexion limitation of the finger and even limited flexion of multiple fingers [12].

The differential diagnosis of fibroma of tendon sheath includes several clinical conditions, summarized in Table 1 [7,12-14]. FTS is most often confused with giant cell tumor (GCT) of the tendon sheath. Both lesions may occur in similar locations, although as compared to GCT, FTS is more common in younger population, in males and tend to occur in upper extremity [15]. Microscopically, FTS is hypocellular, with slitlike vascular channels within a dense collagen matrix [15], whereas GCT of the tendon sheath is more cellular, cells have histiocyte-like nuclei, prominent giant cells, foam cells and hemosiderin but no slit-like vascular spaces and no extensive hyalinized stroma [16].

In FTS, findings on standard radiographic imaging are often normal or may show a soft-tissue mass. Erosion or scalloping of the adjacent bone due to pressure erosion from the tumor has been reported but is infrequent [2,15,17,18]. MR imaging of FTS reveals a focal nodular mass adjacent to a tendon sheath with decreased signal on all pulse sequences and little or no enhancement. The MR imaging findings vary when areas of increased cellularity or myxoid change occur within the lesion [15].

The aspiration cytology of such lesions reveals a hypo cellular smear with bland appearing spindle shaped cells having oval to elongated nuclei and variable cytoplasm. Few hyalinized collagenous fragments and myxoid substance can also be evident. The differential diagnosis of the tumor on aspiration cytology ranges from a reactive fibrous lesion secondary to an inflammatory process to a low grade malignant spindle cell mesenchymal neoplasm [6,21].

Dal Cin et al. investigated that the clonally occurring chromosome abnormality characterized by a t(2;11) (q31-32;q12) found in this fibroma of tendon sheath suggested that this proliferation of fibrous tissue was neoplastic and not a reactive fibrosing process [22].

Treatment of FTS is complete local excision with preservation of the surrounding vital structures particularly neurovascular bundles. Recurrences tend to occur between one month and two years postoperatively, and may be related to pseudopod formation and separate tumor foci in adjacent connective tissue and/or remnants of these foci after initial surgery [7].

Though the clinical features, MRI findings and critical FNAC analysis may give some fare idea of the preoperative diagnosis of FTS but still final diagnosis is based on its histologic characteristic features as FTS has to be differentiated with other soft tissue tumors of the hand particularly. Complete wide excision with its capsule is the treatment of choice. Though rare benign tumor but may pose significant anatomical and neurological complications if not treated timely. 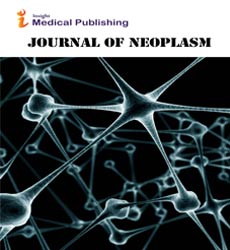 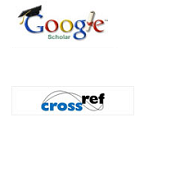